Events
nl|en
Purchase a ticket for the online lecture

Elena Ferrante will give the 13th annual Belle van Zuylen Lecture at the ILFU International Literature Festival Utrecht. She will also receive the Belle van Zuylen Ring, an international honour presented by the ILFU in collaboration with the City of Utrecht.  Elena Ferrante is the author of works such as the bestselling four-part Neapolitan Novels. Ferrante’s lecture ‘A skein of written words’ will be read in Italian, English and Dutch by actresses Anna Bonaiuto, Olivia Colman en Olga Zuiderhoek.

Video and podcast are exclusively available for streaming online during the ILFU Festival
(23 September to 3 October 23:59 CEST).

Tickets: €5
The ticket gives you access to the videos and podcasts of the lecture in all three languages (each ± 30 minutes). Make sure you watch the video's in your desktop browser, since unfortunately not all mobile browser seem to support the streams.

Buying a ticket for the Elena Ferrante lecture enables ILFU to continue to develop these types of projects. The author, actors, translators, camera crews and producers have put a lot of work into making this lecture available to the public. So purchase it here rather than viewing or listening to the lecture illegally. Thank you for supporting literary culture!

Elena Ferrante became a global literary sensation with her four Neapolitan novels, a bestselling series that sold more than 15 million copies worldwide. The first two volumes, My Brilliant Friend and The Story of a New Name, have also been adapted for television. Elena Ferrante is this year’s recipient of the Belle van Zuylen Ring, an international honour presented by the ILFU in collaboration with the City of Utrecht in recognition of the work’s explicit social engagement. Since her debut novel in 1992, Ferrante has created countless characters who illustrate women's position in 20th-century Italian society. Her prose is crystal clear and to the point, with a modernist intimacy that evokes authors like Virginia Woolf and Elsa Morante. Her radical choice to remain anonymous, while explicitly identifying as a woman, is a powerful statement with an intrinsically feminist undertone. In her novels, Ferrante shows why fiction matters, without allowing it to become overshadowed by her own background, history, personal convictions or public actions. In the process, she gives a voice to women from every stratum of society. Her fiction also has an extensive reach: without Ferrante's novels, we would never become so closely acquainted with these Neapolitan women, and people from every corner of the world would never have been able to empathise with their fate.

Ferrante’s novels are published by De Wereldbibliotheek in the Netherlands, by Edizioni E/O in Italy and by Europa Editions Ltd in the US and the United Kingdom. 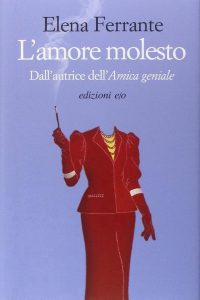 About the three readers

The three actors giving voice to Ferrante’s lecture are all renowned on their countries’ stage and screen.

Olga Zuiderhoek performed with the Werktheater for many years and earned fame with her television roles in series like Het geheime dagboek van Hendrik Groen and Penoza. She was nominated for a Golden Calf for her role as Mother Duif in the classic film Abel by Alex van Warmerdam, and she was presented with the Career Achievement Award at the 2020 edition of Film by the Sea.

Anna Bonaiuto is one of Italy’s most celebrated actresses. Her filmography includes Il Caimano by Nanni Moretti, Mio fratello è figlio unico by Daniele Lucchetti and Il Divo by Paolo Sorrentino. Bonaiuto broke through to the international audience with her role in the film Il Postino (1994), and she played the lead role in the film adaptation of Ferrante’s first novel l’Amore Molesto (Troubling Love). She has also provided the voice of several of Ferrante’s audio books.

Olivia Colman will next be seen starring in Maggie Gyllenhaal’s The Lost Daughter, as well as the HBO/SKY Ed Sinclair limited series, Landscapers, which she is co-producing under her River Pictures banner. Colman’s recent accolades include an Emmy® Award for her portrayal in The Crown; as well Academy Award® and BAFTA Award honors for Yorgos Lanthimos’s The Favourite; alongside many other awards and nominations to date.